It was my girls that first discovered the stop-motion American Girl videos on YouTube.  When they showed me what they had found I was instantly drawn into the videos, not only due to the talent of the film-makers but because these girls had found a way to still enjoy their dolls at an older age.  Believe it or not these videos have even helped some girls realize a film career, did you hear that YouTuber Anna from basilmentos received a college scholarship based on her videos?  American Girl really impressed me when in 2015 they publicly recognized a few of these YouTube channels, and reached out to the American Girl community through the introduction of their own stop-motion filmmaker, Z!

Z is a beautiful doll, and I am so happy she was able to join our AG family.  I also loved the concept behind the introduction of the doll, but I have read many negative reviews of the newer American Girl dolls… not just about the permapanties.  With all the negativity I was naturally a bit nervous about this doll, but I loved her so much I had to take her home! 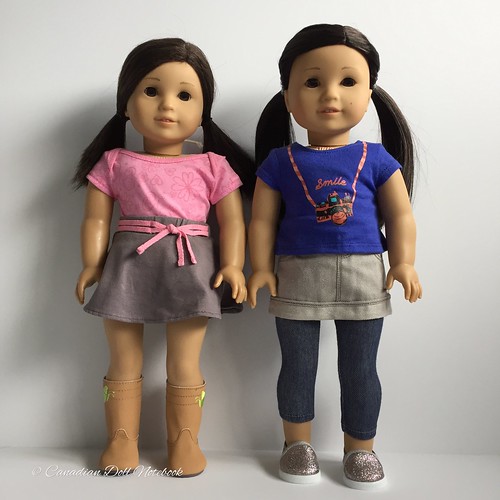 Last week while I was working on my article about the new American Girl permapanties, I noticed that there were other differences as well between the two dolls.  In order for me to show you all the changes, I figured I would once again have my Z doll stand side by side with my older American Girl doll, Truly Me #40.

I had heard many complaints about the new dolls having squishy vinyl, so it was the first difference I wanted to check out for myself.  In order for it to be a fair test I had both dolls in my 20 degree celsius basement, and gave them both a squeeze… 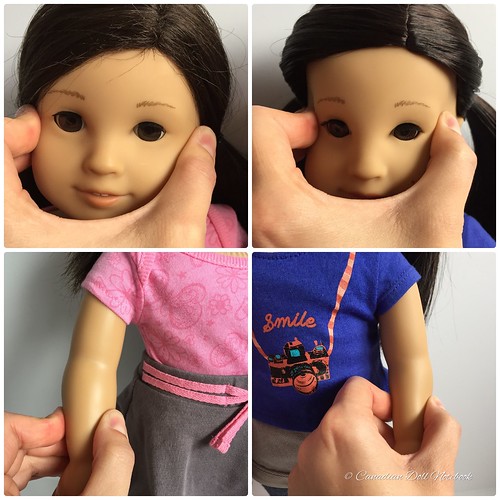 These were my findings, Z’s face on the right was much squisher than TM #40’s on the left.  Z’s arm was also a bit squishier, but not as much.  So yes, the new vinyl is softer than the older. 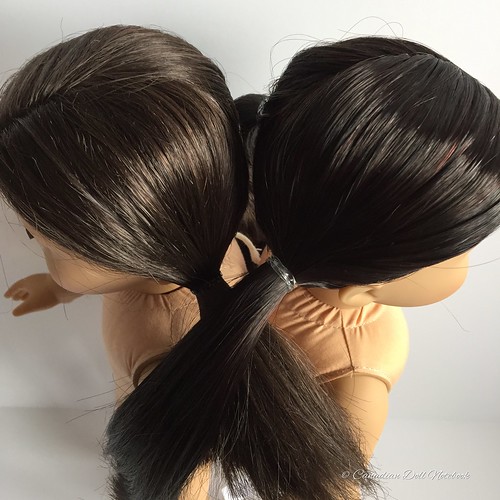 Next I had to check out the hair… this has always been my favourite feature of any doll that I have owned.  Z’s hair on the right is much darker, and has bright red highlights that TM #40 doesn’t have.  Z definitely is a winner in the hair department! 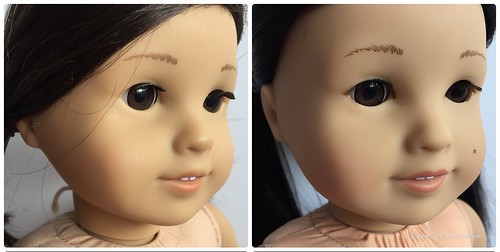 While the two dolls seem to have the same pinwheel brown eyes, and face mold, I noticed a few added details that TM #40 doesn’t have. 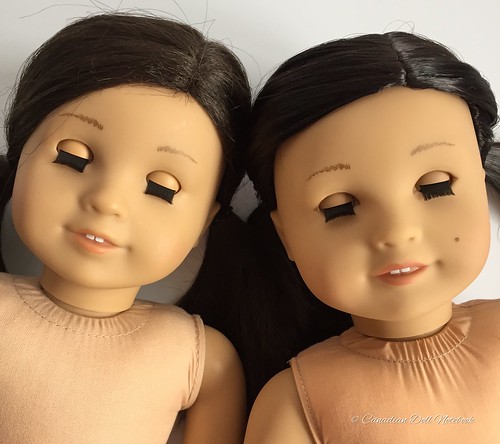 Z has brighter lips and added painted details around her eyes, she also has a tiny mole on her left cheek.  I also noticed that Z’s lips are a brighter shade of pink than TM #40. 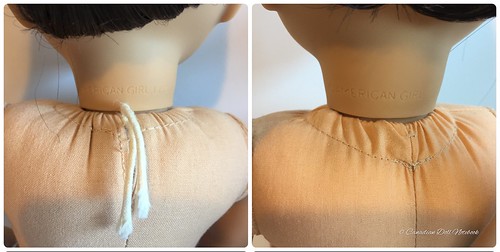 TM #40 has neck strings, and sadly Z has a zip tie, you can see the bump on her left shoulder.  I hear that these zip ties wear through the fabric after time, but what I really don’t like about them is that fact that it makes it more difficult to repair the doll. 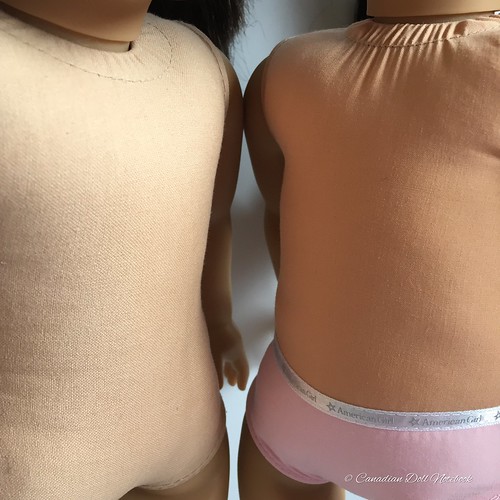 I have also heard collectors complain about the zip ties, stating that they cause an unusual wrinkling in the front.  In the above photo you can see Z’s neck does have more wrinkles around her neck than TM #40, but I also noticed that Z’s torso fabric is a lighter weight than TM #40’s fabric.  This lighter weight fabric would also contribute to these extra wrinkles. 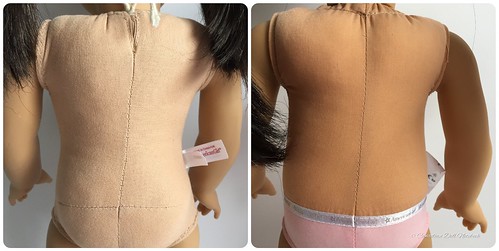 The downfall of Z’s lighter weight fabric is also visible on her back seams.  As you can see in the photo on the right, Z’s seam allowance is visible through the fabric, where you can’t make out TM #40’s seam allowance at all. 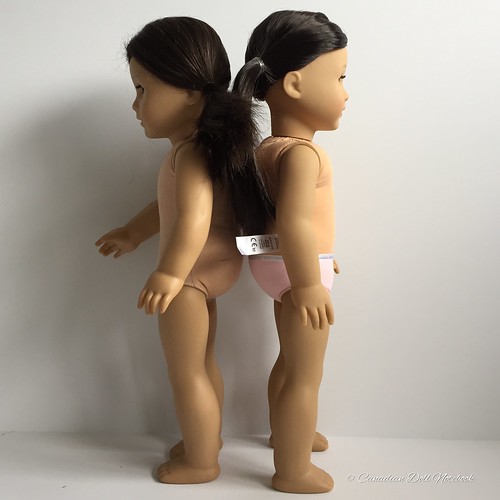 I also noticed that Z was a bit taller than TM #40, since both dolls share the same mold I found this very interesting… 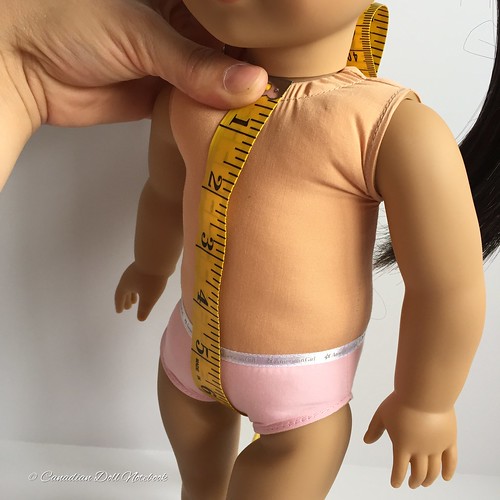 So I pulled out my measuring tape, to see if there was a size difference in their torsos. 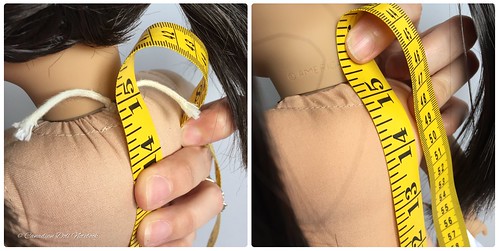 I measured the dolls from their suprasternal notches to their napes and got different numbers.  TM #40’s measurement was 15 inches, where Z’s was about 15.5 inches, not a big difference in humans, but noticeable in dolls.  I had also heard that the new dolls where slimmer, so I figured I would check that out as well… 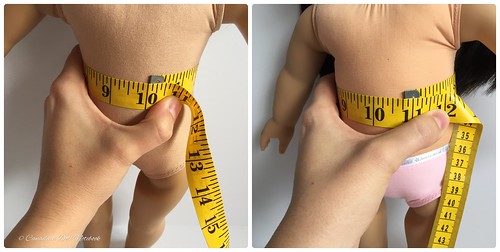 Strangely enough I had the opposite findings, my TM #40’s waist was a mere 10 inches, where my Z’s waist was 10 3/4 inches… maybe my Z doll found the jelly beans I was hiding in the basement?

On my way to check out the jelly bean situation in the basement, out of curiosity as I passed by my Pleasant Company Molly I gave her face face a squeeze…. 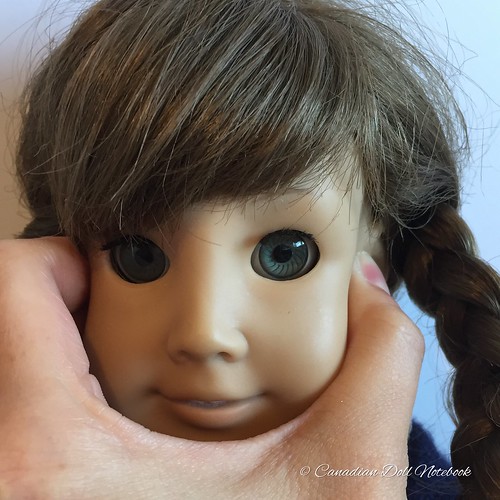 To my surprise her face is just as squishy as Z’s!  Is this because she is getting older?  I mean she is probably going on 25… or is this just a characteristic of early Pleasant Company dolls?  I am not sure… but I feel like another doll comparison is in the works…