Have you ever wondered what those numbers that you find on your Maplelea doll’s neck mean? Well let me help you make some sense of it!

The number on the back of a Maplelea doll’s neck (I rubbed chalk on the embossing to help this show up for the photos in this post)…is known as the “generation number”.

Most dolls will have two numbers on the back of their neck as you see above, unless you have a first generation doll. 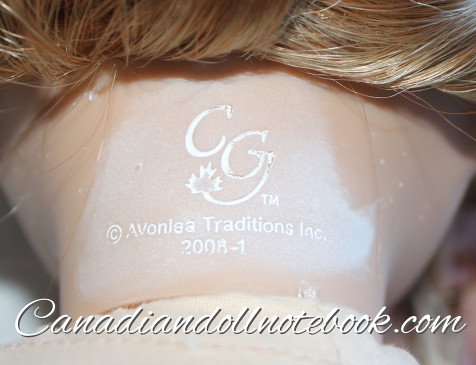 This is the back of a neck of a first generation Leonie doll (again I used chalk).  Notice that there is no stamped number below the embossed number. If your doll only has one number like this, congratulations you own a first generation doll!

Thank you Dollation for helping me to make sense of these numbers!

I origianlly wrote this post in the summer.  This past fall, 2015 the newest Maplelea doll, Charlsea was introduced.  This is what I found on the back of her neck… 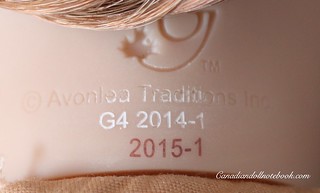 So what I figured from this was that the doll had been slated to be introduced in 2014 and this doll in 2015 is part of the first production run.  The G4 threw me for a loop so I asked Maplelea, and this is the response I received… 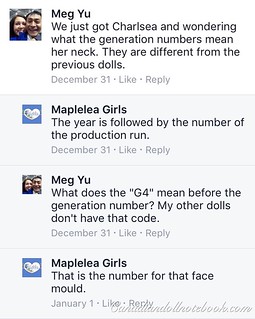 So what I gather, is that they had different face moulds for Charlsea, and this is the one they choose, “G4”.

Just side note: Did you happen to notice the date I asked and received the answers?  New Year’s Eve and New Year’s Day!  Maplelea has incredible customer service!

I hope his post answers your questions about Maplelea’s generation numbers.  Anything else you would like to know about these dolls?  Just ask, if we don’t know we will find out!

If you would like to see the differences between the first generation Leonie (2008-1) and Leonie 2011-6, visit this post.

2 thoughts on “Why are There Numbers on my Maplelea Doll’s Neck?”